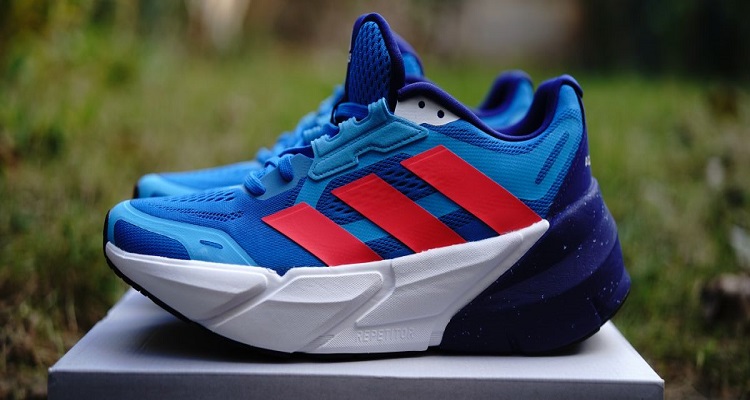 By Matt Kollat published 3 days ago

Bye bye, Ultraboost. The Adidas Adistar is the new number one choice for athletes who need running shoes for slower sessions. Thanks to the Repetitor/Repetitor+ dual-density foam underfoot and the rocker shape of the sole, the Adistar does an excellent job in rolling your forward mile after mile after mile.

But this shoe isn’t just about performance. The upper is made of recycled plastic, in line with Adidas’ effort to make its performance footwear line more sustainable. As well as being more environmentally friendly, the upper is also comfortable, including the integrated cage system that fastens the shoes to the feet securely.

The Adistar might not be aimed at sneakerheads quite as much as the Ultraboost but it looks pretty retro nevertheless. Let the colours fade a bit and squint your eyes and you might mistake the Adistar with an Adidas running trainer from the 70s.

The Adidas Adistar was released in December 2021 and is available to buy now at Adidas and selected third-party retailers such as Sportsshoes.com for a recommended retail price of $130 / £120 / AU$185.

The Adidas Adistar is currently available in two colourways, Core Black / Cloud White / Grey Five and Blue Rush / Turbo / Legacy Indigo. However, we expect to see many more new colours come out in the near future.

The Adistar is a slightly different running trainer from Adidas. It’s not a fast running shoe such as the incredible Adidas Adizero Adios Pro 2.0, nor is it a tempo trainer like Adizero Boston 10. No, the Adistar is for slow training, and it occupies a similar space to the Ultraboost 22, all the while being completely different.

The Ultraboost series has long been criticised for being too sneaker-like, which used to put off more diehard runners. Never mind that it’s a pretty decent shoe for the same purpose as the Adistar (slow runs). And since Adidas is now taking the Ultraboost series in a new direction by focusing on female runners, the time was ripe to release a running shoe that fills the void.

Enter the Adidas Adistar. This bulky running trainer looks like a running shoe, behaves like a running shoe and quite frankly does a great job moving you forward. The robustness is not dissimilar to how Hoka designs its shoes – just think of the Bondi X – and some Nike trainers (the Nike ZoomX Invincible Run springs to mind).

This sizeable rocker-like sole is made of dual density foam. You’ve got Repetitor foam (the white section of the sole) at the front, and the firmer Repetitor+ foam (the dark blue area) under the heel working in tandem to mitigate impact force and provide a platform to kick yourself off from as you take one step after another. This shape and foam combination is said to have been tested over 4,500km to make sure it works as well as intended.

The upper looks somewhat retro if you ask us and is made of yarn that contains at least 50% Parley Ocean Plastic  and 50% recycled polyester. It’s nice to see that Adidas emphasises sustainability, and we expect to see even more sustainable Adidas running shoes coming out in 2022.

Considering the purpose and the size of the Adistar, we wouldn’t say it’s too heavy: a size 10 (men’s, UK) Adidas Adistar weighs 345g which is actually lighter than the UB 21 of the same size (384g).

The Adidas Adistar is designed for slower runs when you want to run far, but you’re also not in a rush. And let’s face it, even if you’re training for a half marathon, most of your runs should be well under race pace, building the mileage and making sure your muscles and joints are used to the sustained moderate effort that is long-distance running.

You should wear the Adistar for these kinds of runs. It’s a slow-burner shoe that makes slower training surprisingly enjoyable. Most runners can’t run slow; no matter what your Garmin Coach says, it just feels too slow to run at that pace, right? The good news is, even slower runs won’t feel sluggish in the Adidas Adistar.

This is thanks to the rocker geometry and the dual-density foam. The rocker shape, in particular, is very well designed, especially the cutaway section under the heel. When wearing shoes as tall as the Adistar, runners often ‘drag’ their heels as the shoe lands sooner than expected. Thanks to the Adistar’s sole shape, this hasn’t happened once while we were out on test runs.

It might be designed for slower runs, but the Adistar performed well even when we ran a bit faster. It hasn’t got the integrated carbon plate – probably for the best – so don’t expect it to be too snappy at toe-off, but the rocker shape does a great job in helping you move forward, one step at a time.

We really enjoyed the fit of the upper, which is comfortable and well padded. Similar running shoes often feel warm after long runs, but this wasn’t the case with the Adistar. That said, the weather was cold during our test runs, so you might have a different experience jogging in 30C heat.

The upper features an integrated cage system that secures the midfoot for extra support. Having a cage system often puts too much pressure on the midfoot, but thanks to the fluffy tongue, it was an absolute pleasure to wear the Adistar. Even after more extended sessions, our feet felt fresh and well-looked after.