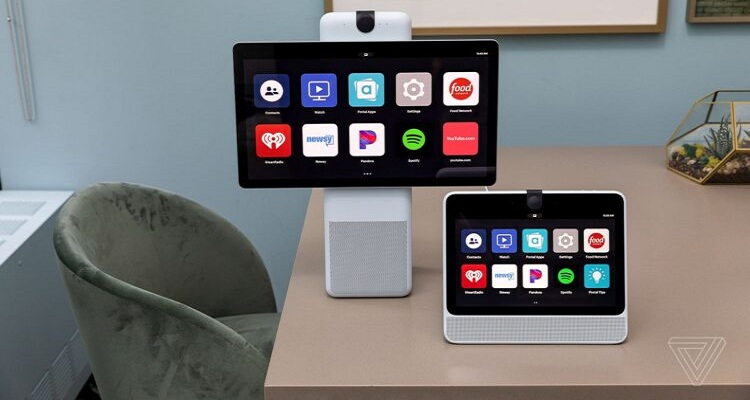 By Carrie-Ann Skinner published 2 days ago

Smart displays that feature built-in cameras can prove useful at home since they can be used to make video calls to help stay in touch with friends and family. However, the screens are often smaller than many tablets, which means the experience isn’t what you hoped for.

The new Facebook Portal Plus hopes to change all of this. The 14-inch screen is the largest in the social media giant’s range of smart displays. Even better, it can be manually tilted up or down to ensure it’s at the perfect viewing angle.

It has the same 12MP built-in camera that can be found on the brand’s portable smart display, the Portal Go, although it has a slightly larger 131-degree field of view, which results in clear video calls. The camera also ensures you’re in the center of the frame during calls by panning and zooming when you move around.

The Portal Plus supports several video calling apps such as Zoom and WebEx, but crucially, it’s the only smart display that can be used to make calls via Facebook Messenger and WhatsApp. It also enables you to apply filters and augmented reality (AR) effects such as animal faces and characters, including Harry Potter, during the calls. The Portal Plus can also be used as a digital photo frame and display snaps from your Facebook or Instagram account.

It’s fair to say that Facebook and privacy concerns go hand in hand. However, in a bid to quell fears of being watched, the Portal Plus includes a physical cover for the camera and a button that automatically disconnects the power to both the camera and the microphone.

The Portal Plus also lets you listen and watch streaming services, however, there’s not the plethora of choices found on other devices. It offers apps for Spotify, Deezer, and Tidal but when it comes to video streaming unless you want Facebook Live or Facebook Watch, you’ll have to use the built-in browser to watch services such as Prime Video or YouTube. This certainly isn’t as slick as using an app, and for some services, such as Netflix, it just doesn’t work. We have asked Facebook why this is the case, but it has yet to respond.

There are two voice assistants built into the Portal Plus: Alexa as well as Facebook’s own smart assistant, although its capabilities are more limited compared to Alexa. Amazon’s voice assistant, however, behaves the same way as it does on the brand’s own smart speakers and displays, enabling you to control music playback, search the web and control smart home devices.

At $349 / £349 / AU$519, the Facebook Portal Plus is one of the most expensive smart displays we’ve tested, especially when you consider that it lacks some of the features found on Amazon’s more affordable range of smart displays, However, if you want a large-screened smart display primarily for video calling, or you have children that will be sure to make use of the AR-related features, it’s worth considering.

The Facebook Portal Plus will set you back $349 / £349 / AU$519 and is available directly from Facebook. It’s the most expensive Portal device on the market, but it is the one with the latest screen.

The 14-inch HD screen, which has a resolution of 2160×1440, can be tilted to ensure it’s at the best viewing angle and comes with the same two 5-Watt full-range speakers and one 20W woofer, which can be found on the Portal Go. It also features the same four-mic array ensuring your voice is picked up clearly when you’re on a call.

It has the same 12MP camera for video calls as the Portal Go, but the field of view is slightly larger at 131 degrees. The camera is mounted on the top of the screen, obscuring the otherwise sleek look of the device. A button on the top of the camera mutes the microphone and cuts the power to the camera but there’s also a physical privacy shield for the camera, which can be manually slid across if the button doesn’t offer enough reassurance. However, there are no physical volume controls on the Portal Plus, instead, you’ll need to use the on-screen controls.

With both Wi-Fi and Bluetooth connectivity, the Portal Plus ensures you can listen to music over a streaming service or tracks stored on your smartphone through the smart display.

Facebook has been vocal about how the Portal range of devices are designed primarily for staying in touch, unlike many other smart displays on the market where calling is a secondary feature. It can be used to make both video and audio calls to your Facebook Messenger or WhatsApp contacts, and also supports Zoom.  There’s also an array of more business-focussed video-calling apps including Go-To meeting, Webex, Workplace, and in the near future Microsoft Teams, supporting Facebook’s claims the device is an ideal second screen while working from home.

Multiple accounts can be set up on the Facebook Portal Plus, and you can restrict which apps and contacts each profile can access with a code. It helps ensure someone won’t accidentally start or join a work meeting on Zoom.

When it comes to video calling, we were impressed with the Portal Plus’ ability to pan and zoom during calls to ensure we were always in the center of the frame. It was smooth, natural and the camera only readjusted when we clearly moved around the room, rather than when we shifted in our seats. It’s not the only device to offer this kind of feature however, Amazon’s Echo Show 10 and Echo Show 8 (2nd gen) both offer a similar feature, as does the Apple iPad Pro (2021).

We did find the 131-degree field of view gave a slight fish-eye effect to the footage, but it wasn’t enough to detract from the video call.

There are plenty of features that will enthrall children (and young-at-heart adults), such as an array of AR effects that can be applied during Facebook Messenger calls and WhatsApp calls (although the recipient can only join in during a WhatsApp call if they are also using a Facebook Portal). There’s also a Photo Booth feature that lets you preserve the fun by taking a digital photo with the applied effects.

Meanwhile, the Story Time function enables Little Red Riding Hood and other fairy tales to be read on-screen, with the addition of music, animations and in some cases, filters that make you the center of the action.

Aside from video calls, the Facebook Portal Plus offers other features you expect from a smart display. There’s a built-in web browser for surfing the web and it can be linked with Google or Outlook calendars. It also doubles as a digital photo frame, showing off your favorite snaps from Facebook and Instagram.

Want to use the smart display when cooking? The recipe app SideChef is available and will display the steps of a recipe, along with the ingredients, but there’s no option to have the information read aloud like the Amazon Echo smart displays.

Streaming services including Spotify, Deezer and Tidal, as well as Pandora and iHeartRadio in the US, are among the handful of apps available for the Facebook Portal Plus, which means it can easily be used as a home speaker. The speakers offer a room-filling sound, but while the 20W woofer ensures you can pick out the bass frequencies, they’re not particularly powerful, and we found there was some distortion at full volume, too.

The Facebook Portal Plus is ideal for background music or catching up on your favorite podcast while you’re cooking, or doing chores, but it certainly won’t suffice as your main speaker.

The addition of Bluetooth means you can play music stored on your smartphone or tablet through the smart display’s speaker, but it lacks a 3.5mm socket, so there’s no way to use headphones for private listening.

As mentioned, there are only a handful of apps available for the Facebook portal Plus, and hardly any of those are designed for video streaming. Facebook Watch and Facebook Live are available, along with Food Network and Paramount Plus in the US. We were able to watch Prime Video and YouTube through the web browser, however it wasn’t the slickest experience, and isn’t supported by all streaming services – Netflix being the notable one.

The HD display is clear and we were impressed by how the screen brightness is automatically adjusted to suit your surroundings so it’s always easy to see. However, once again, it isn’t enough to be your main screen, but will suit those who want videos running in the background while they’re doing other tasks.

When it comes to voice assistants, you’re spoilt for choice with the Facebook Portal Plus, as it has not one, but two installed; Amazon’s Alexa or Facebook’s own smart assistant.

Alexa works in exactly the same way as on any other device. Simply say ‘Alexa’ and it will control music playback, turn smart home devices on or off, answer your burning question or serve up the latest news headlines, sports scores or weather report. You can also view a live stream from compatible video doorbells or home security cameras by opening the Alexa app.

Meanwhile, Facebook’s voice assistant has limited capabilities compared to Alexa. It can be activated by saying “Hey, Portal” or in the US, the phrase “Hey, Facebook” will also work. During testing, it successfully provided us with a weather report, adjusted the screen brightness, and added AR effects to the camera when asked. However, it was unable to control music playback or switch smart home devices on or off.

However, it struggled far more than Alexa with background noise – if there was too much sound from other sources, or were using the Bluetooth connection to play music and just paused it rather than completely disconnected, the voice assistant would simply fail to process our request.