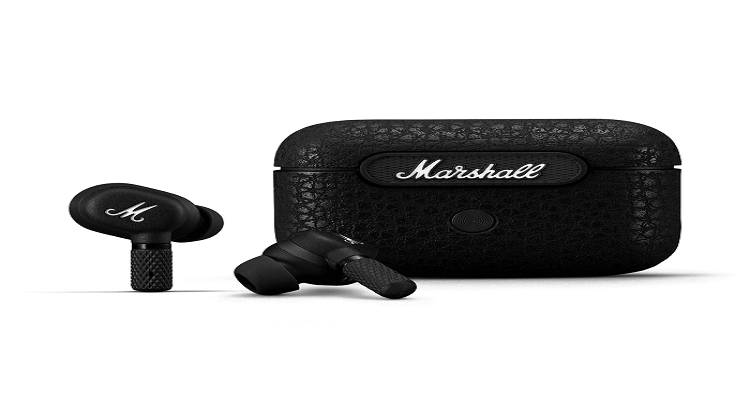 By Dave Stevenson published 3 days ago

There are no two ways about it: the Marshall Motif ANC. are cool-looking true wireless earbuds. The proportions and logo of the charging case recalls the brand’s iconic amps and the earbuds are styled with the company’s M typography, while the plastic stems have a cool knurled effect.

Connection is via Bluetooth 5.2, allowing the earbuds to pair over long distances. Even in a building crowded with walls and competing Bluetooth signals, we found we could get quite far away from our smartphone before experiencing signal breakup. Pairing is done with a long press of the button on the front of the case.

With the charging case, you get a maximum playback time of 20 hours – not the best battery life on the market, but not the worst. Pop the earphones in their cozy home for 15 minutes and you’ll give yourself an hour of listening time; a full recharge from flat takes three hours via USB-C.

The Motif ANC look and sound fantastic, and the active noise cancellation makes them really useful if your commute is noisy or you’re a frequent flier. You can turn the noise cancellation off if you want, or adjust the headphones’ transparency mode, allowing you to hear sounds through feedback through your music – useful for keeping your wits about you when crossing the road, for instance.

In terms of audio performance, higher pitches sounded bright and clear with plenty of detail, and the midtones were a similar story (if just ever so slightly less impressive). On an initial listen we felt that the bass output was a little underwhelming, but a visit to the Marshall Bluetooth app fixed that – from the app you can make adjustments to which touches to the earphones do what, as well as make changes to their equaliser settings.

A quick tap of the Hip Hop preset (our personal favorite) really unleashed the Motifs’ power: there’s absolutely loads of low-end grunt here, which is truly impressive for a set of wireless headphones weighing under 5g each. They’re comfortable, too.

Complaints? We have a few, not least of which is the somewhat quirky design of the case, which prevents it from standing up straight. Of more concern is the Motif’s incomplete approach to touch control – there are a few things you can do without having to dig your phone out of your pocket, but changing the volume, strangely, isn’t one of them.

There’s no point in the Motifs having such legendary Marshall branding if they sound like kazoos, so we’re pleased to report we love how they sound, bearing up well to the likes of Apple’s excellent AirPods Pro – for audio quality at least.

There are a few differences between these and Apple’s own-brand hero headphones – particularly when it comes to connectivity – but for fashion-conscious audiophiles who want to stand out a little, these more than justify their price.

The Marshall buds are also cheaper than the best true wireless earbuds we’ve tested so far, the Sony WF-1000XM4 – though they don’t match Sony’s earbuds in terms of audio performance or noise cancellation.

Looks-only? These are great. The leather-effect case looks cool, the Marshall logo is iconic and the headphones themselves are all styled with thoughtful design touches that audiophiles will love. Even the USB cable has a textured finish, and it all adds up to a well-designed product that sits well with the branding it carries. The case has an IPX4 water resistance rating and it’s scratch-proof, so it should age well even if you’re prone to chucking your accessories in a bag willy-nilly.

They fit really well. They come with two extra sizes of rubber eartips so you can pick the size that fits you best. We’ve seen other headphones that come with more options, but unless you’ve got particularly cavernous ears you’ll be able to get these to fit nicely.

We had no problems with the standard eartips, and were able to wear them both in normal use and while jogging with no gravity-related disasters. The earphones themselves are IPX5-rated, which is a little better than the water resistant rating offered by Apple’s AirPods Pro, and it means you should be able to use them while working out.

The design isn’t an unvarnished triumph, though. The charging case doesn’t have a flat surface except on its back, so it can’t stand upright, and the Motifs suffer from our principal bugbear with Apple’s AirPods – you can’t change the volume on them with a touch, instead having to dig your phone out to adjust your playback. Fine if your phone is in your pocket, annoying if your phone’s in a backpack. You can do other things with a touch – double touch to skip a track forwards, triple-touch to shuffle back to the last track you listened to, while a long press cycles through noise cancellation, transparency mode, and no sound modifications at all.

Finally, they’re comfortable. At a little under 5g they’re effectively weightless, and their slightly rectangular design – though unusual – is very comfy.

We really love how these wireless earbuds sound. For such a small pair of buds there’s lots of bass, without it being thumpy and unrefined. High frequencies are crystal clear with plenty of bright-sounding detail – as befits a brand to be seen festooned all over the stage at a rock concert, these make rock and punk music sound especially punchy.

The mid-range has just a smidge less ‘wow’ to it, but that’s only because it’s a little ordinary compared to the impressive extremes of the audio spectrum. Audiophiles will like the Marshall Bluetooth app, which includes the ability to change how the headphones’ equaliser is set up. This includes the ability to create your own equaliser setups, as well as letting you turn active noise-cancelling on or off.

Speaking of which, the ANC on the Motifs is really good; it impressively allows you to hear your music uninterrupted by ambient sound with no additional background noise or audible digital interference – and being able to long-tap either headphones in order to switch to the transparency mode is a convenient feature.

Charging is via the USB-C port on the base of the case, and there’s QI wireless charging as well if you have a compatible charging pad. Charging is fast: sling the earphones in the case for 15 minutes and you’ll give yourself an hour of playback; charging them up from totally flat to fully charged takes three hours. It’s the same for the case – if you run it flat it takes about three hours to get back to fighting fitness.

Playback is claimed at up to 20 hours – that’s 4.5 hours from the earbuds themselves, and a few charges from the case. That’s about the same as the AirPods Pro, but Apple’s noise-cancelling earbuds are a good two years older than the Marshall Motif ANC. Plus, there are plenty of true wireless earbuds that offer far longer battery lives, such as the Sennheiser Momentum True Wireless 2, which offer 35 hours in total. And yes, they come with noise cancellation as well.

That battery life isn’t quite enough for a long-haul flight but in day-to-day use you’re unlikely to run them flat unless your commute is particularly epic. The only other thing to note is that the active noise cancellation is a bit of a battery hog, and in our tests we got a bit over an hour more listening time with it turned off. Ironically the times you’ll most want to use noise cancelling (on planes and transport, normally) are the times you’ll also want to eke out the most from the battery.

Wireless connectivity is a simple one – you get Bluetooth version 5.2. This gets you long pairing distances with your music playback device – we found it to be particularly impressive when we had good line of sight and no competing signals, though the distance was a little less in a house with plenty of solid walls and competing signals.

Pairing is easy – long press the button on the charging case to put the headphones in pairing mode and they pop up in your device’s list of Bluetooth options. Unlike Apple’s AirPods, these can only be paired with one device at a time, so you’ll need to re-pair them if you want to go from listening on your phone to your tablet or laptop.