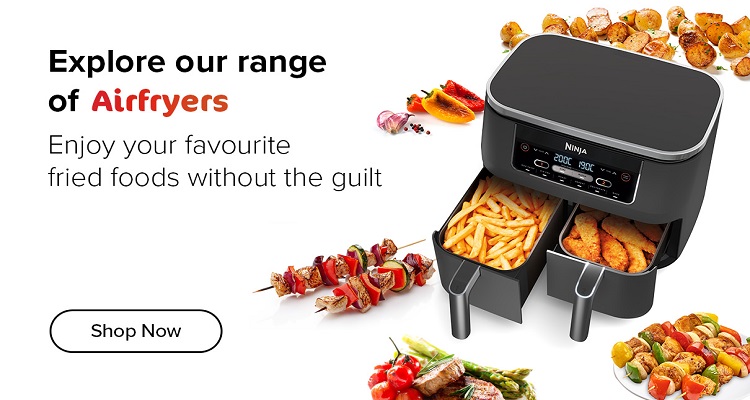 Air fryers have been around since 2010 and their popularity continues to grow as more and more people discover that these countertop appliances can cook, crisp and brown foods so fast that your oven feels unbearably slow in comparison. Ninja is known for making some of the best blenders and Instant Pot alternatives, but you can also look to this brand for some of the best air fryers.

It’s certainly pricier than other air fryers of this size available from rival brands, but it can do much more than producing tasty healthier versions of classic fried foods. It’s got six functions (seven on the US model), in addition to air frying it can be used to bake, roast and even dehydrate foods making it a versatile appliance.

It’s a neat compact air fryer that still boasts a 5.2 litre / 5.5-quart capacity so there’s enough space for four portions of fries or even for a whole chicken. It works like most air fryers, by efficiently circulating very hot air in a small space, cooking foods 50% faster than fan ovens to create crisp results that require up to 75% less fat than traditional frying.

On test we found it easy to use, it was able to create impressively crisp results in a short time and is a great choice if you’re looking to switch out fried foods for a healthier alternative.

This isn’t the cheapest air fryer from Ninja, the Ninja Air Fryer AF100, which is known as the AF101 in the US, is the least expensive model offered by Ninja at £129.99 / $119.99 but it doesn’t have Bake or Max Crisp settings and it’s not available in Australia.

The ceramic-coated cooking basket comes with a removable ceramic-coated crisper plate, this raises food off the bottom of the basket, allowing air to circulate and excess fat to drip away. Both are non-stick and can be cleaned in the dishwasher. The basket is equipped with a large chunky handle to pull it out, which is also useful for giving your food a shake mid-cook.

The simple control panel features a digital display to count down the cooking time. Each cooking function can be selected by pressing the corresponding button and there are additional buttons to adjust the default time and temperature settings as well as a start/ stop button and a power button. There are six cooking functions to choose from on the UK and Australia models, these are; Max Crisp, Air Fry, Roast, Bake, Reheat, and Dehydrate. The US model comes with a seventh function, which is Air Broil.

The air fry function can be set for up to 60 minutes at a maximum of 210 C  / 410 F while the more powerful Max Crisp function heats at a set temperature of 240 C  / 450 F for a maximum of 30 minutes. There are no predefined settings for your favourite foods, but you get a Quick Start Guide in the box which includes time and temperature suggestions as well as oil quantities for lots of foods as well as 20 recipes to try. However, we’d like to see more cooking advice given for the Roast and Bake functions as the guide is lacking this info.

There’s no set-up required and with a simple intuitive control panel and lots of cook times provided, it’s easy to get going with the Ninja Air Fryer Max AF160 even if you’re an air frying novice.

The manual suggests preheating the air fryer for three minutes to get the best results, so before adding food we set the timer to three minutes and let it preheat. This process isn’t annoying, but it would be great if Ninja could incorporate a preheat setting to make it simpler.

Using the Quick Start Guide we figured out an air fry time of 20 minutes for our hand-cut chunky fries. The guide advises between 0.5Tbsp to 3Tbsp oil, so we opted for 1.5Tbsp which is more than required by some other air fryer brands, but at the end of cooking over 0.5Tbsp had drained into the bottom of the basket, leaving less than 1Tbsp on the fries.

We gave the fries a shake three times during cooking, but you do have to remember to do this as the air fryer doesn’t prompt you. The finished fries were golden, crisped and fluffy inside, but we could have shaved a minute or two off the cook time as some were a little overdone, having said that it was a pleasingly fast result to go from raw potato to cooked fries in just 20 minutes.

Frozen steak cut fries cooked to perfection on the Max Crisp setting and despite the bag giving a cook time of 26 to 28 minutes, they took just 12.5 minutes which is less than half the time they would take in an oven. We did preheat the air fryer for three minutes first and had to give them a shake a couple of times, but the result was impressively crisp fries with soft fluffy centers.

When cooking chicken wings we reduced the suggested cook time, due to our portion being much smaller than the amount suggested in the guide. In the end, they took 12 minutes and we chose not to add the 1 tbsp oil that Ninja suggested, this allowed fat inside the wings to drain away for a healthier option. We turned the wings twice during cooking and they developed a crisp skin while staying moist and succulent inside.

The hottest temperature we recorded on the outside of the air fryer was 50 C / 122 F  but the handle and control panel stayed cool. The air frying process was quiet, registering just 50dB on our noise meter, making it one of the quietest air fryers we’ve tested to date, and the equivalent sound level of general chatter at home and completely acceptable.

Nothing stuck to the basket or the crisper plate during our testing and both washed well in the dishwasher, although they aren’t too tricky to wash by hand either.

Should I buy the Ninja Air Fryer Max AF160?

You’re short on counter space
Although it is tall, its small footprint means this air fryer doesn’t dominate your kitchen counter so you can enjoy the benefits of air-fried foods even if your kitchen is compact.

You want an easy-to-clean air fryer
The pan and crisper plate can be washed in the dishwasher so there’s really very little cleaning you’ll need to do by hand.

You want healthier fries fast
From raw potatoes to crisp golden home-cooked fries in just 20 minutes, not only can this air fryer save time in the kitchen, but you’ll be making healthier fries with less oil than if you cook them in a fryer.

You want dual cooking zones
With just one cooking basket this air fryer doesn’t give you the option to cook two foods alongside each other like the Ninja Foodi Dual Zone Air Fryer AF400.

You’re cooking for a crowd
Depending on what you’re making there’s ample space to cook for up to 4 portions but larger families would benefit from an air fryer with a larger capacity.

You want food presets
Some air fryers offer predefined settings for common foods like fries, chicken and frozen food. Instead, this air fryer comes with a quick start guide full of cooking charts detailing time and temperature settings for a whole host of foods.