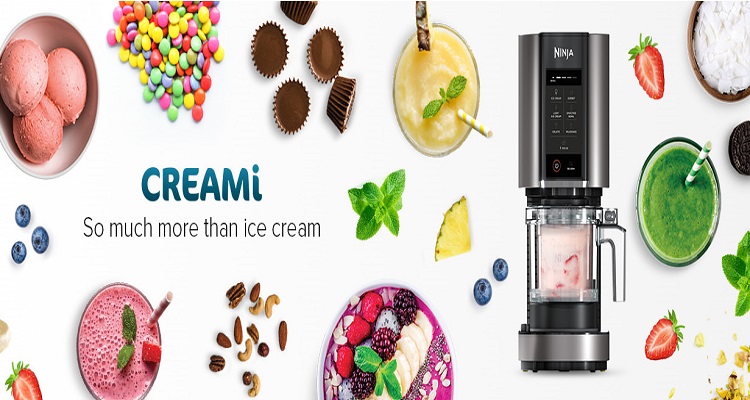 Ninja’s Ice Cream Maker employs neither of these techniques, however. Instead, it requires you to make and freeze the ice cream base in the dessert tubs that come bundled with the ice cream maker for 24 hours. Then a two-blade paddle uses downward force to work its way all the way through the tub of ice cream, shaving and smoothing the mixture to break down the ice crystals. This results in a soft, creamy, super-smooth frozen dessert.

The Ninja’s capacity of 473ml / 1-pint of ice cream is smaller than many freeze-first ice cream makers. However, where it trumps those models is its ability to create creamy desserts using dairy and sugar substitutes.

At $199.99 / £199.99, the Ninja Ice Cream Maker NC300 is an expensive kitchen appliance that takes up a lot of space, plus it’s noisy to boot. However, if you’re a fan of frozen sweet treats, then the creaminess and smoothness of the desserts it creates more than makes up for the initial outlay.

The Ninja Ice Cream Maker NC300, or the Ninja Creami NC301 in the US, is priced at $199.99 / £199.99. It’s available from Ninja direct, as well as from online retailers including Amazon. However, it’s currently out of stock in the US, although Ninja says supplies will be available soon.

The Ninja Ice Cream Maker NC300 comes in at a similar price to compressor-style ice cream makers, such as those from Cuisinart. However, it still requires the same level of planning as freeze-first ice cream makers.

The ice cream maker comes with three plastic 473 ml / 1-pint dessert tubs and lids into which sweet treat bases should be frozen. These are then inserted into the outer bowl to be churned; the lid with a two-blade paddle attaches to the top, scraping and folding the contents.

The ice cream maker has two motors, one to spin the paddle and another to apply downward pressure to break up the ice crystals quickly.

There are six presets that allow you to prepare everything from traditional and low-calorie ice cream, to gelato, sorbets, smoothie bowls and even milkshakes. An additional program enables chocolate, nuts, sweets and cookie chunks to be evenly distributed through the ice cream, for those who like their sweet treats textured with surprises. Advertisement

All of the removable components are dishwasher safe, making for easy clean-up, too.

We were super-impressed with the Ninja Ice Cream Maker for making frozen desserts. We made a traditional ice cream, gelato, with an egg custard and cream base, fruit sorbet and dairy-free ice cream that included a sugar substitute to keep the calories low. The resulting four frozen desserts were rich and creamy, with the ice cream and gelato being extremely smooth, free of any ice crystals.

As mentioned, you’ll need to make the ice cream base and freeze it in one of the included dessert tubs for 24 hours first. This is a little fiddly: you need to ensure the liquid is frozen level; not at an angle. Unfortunately, if you don’t get this right then you’ll need to throw out the base and start again, as the ice cream maker won’t be able to provide a consistent churn.

Succeed, however, and it’s quick and simple to turn the frozen content full of ice crystals into a smooth and tasty dessert. Just remove the lid from the dessert tub and insert it into the outer bowl, attach the paddle to the lid and and connect it to the outer bowl. Everything locks together with a satisfying click, after which you’re ready to select one of the seven dessert programs that include ice cream, gelato, sorbet, light ice cream, smoothie bowls and even milkshakes.

There are seven to choose from, lasting between one and two minutes, with the paddle churning the liquid until it’s smooth. There’s also a handy ‘mix-in’ function that enables you to add chocolate, nuts, sweets and cookie chunks to your ice cream once it’s been prepared. However, we found you need to burrow a 4cm / 1.6 in core in the dessert that you fill with the items you want to be mixed-in to the sweet treat. Ninja recommends a spoon, but we found an apple corer proved far more successful here. This was time-consuming, but the mix-in program itself only took a minute to evenly distribute 45g / 1.6oz of chocolate chips though our vanilla ice cream.

We were also impressed with the dairy-free ice cream created in the machine. While the frozen desert wasn’t entirely free of ice crystals, they were extremely small and few and far between – which isn’t something we’ve ever been able to achieve in other ice cream makers.

Note, however, that this ice cream maker is extremely noisy in use. Our decibel meter registered a maximum of 88.4dB when making sorbet, which is the equivalent of using a vacuum cleaner such as the Anti Hair Wrap Cordless Stick Vacuum Cleaner with PowerFins & Flexology from Ninja’s sister brand Shark. Although considering the maximum program length is only 2.5 minutes, we didn’t find it too much of a chore to sit through.

Should I buy the Ninja Ice Cream Maker NC300?

You want freshly churned, creamy frozen desserts
We were very impressed with the Ninja Ice Cream Maker NC300’s ability to create soft, creamy desserts that are on a par with the frozen treats you can get from an ice cream parlor.

You make low fat or dairy-free desserts
Traditional ice cream makers require high levels of fat to ensure the mixture can be churned into smooth, creamy desserts. However, with a dedicated program for low-fat and dairy-free options, the NC300 is ideal if you want to make treats using alternatives.

You have plenty of time
With a pre-freeze that takes 24 hours, you’ll need to wait to enjoy the spoils from the Ninja Ice Cream Maker NC300. However, the results are totally worth it.

You’re on a budget
At $199.99 / £199.99, the Ninja Ice Cream Maker is expensive, especially when you consider it requires the same level of preparation as a freeze-first machine, which can be found for a quarter of the price of this model.

You can’t handle noise
With our decibel meter registering an ear-splitting 88.4db whilst churning, the Ninja NC300 is an extremely noisy appliance – and one to avoid if you prefer quieter kitchen gadgets.